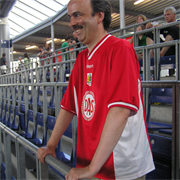 I’m often asked how long it is now since I began banging the drum for rail seats. To be honest, I can’t put my finger on the precise moment that I first became aware of them or that they represented an ideal way to bring formalised standing areas to otherwise all-seater stadia in the UK. But it certainly goes back at least 13 years, as I had a mate take this photo of me standing behind the rail seats at Hannover during the 2005 Confederations Cup.

A few years later, as I became more involved with the FSF safe standing campaign, I had the idea of touring the country with a ‘Safe Standing Roadshow‘ to demonstrate to clubs, fans, politicians and the media that what I was championing was very definitely not a return to the huge, crumbling terraces of the ’70s.

As you are probably aware, the roadshow unit was subsequently designed and built for me by Ferco Seating. They’re the seating manufacturer that went on to do the installation of nearly 3,000 rail seats at Celtic in 2016 and the installation this summer at Shrewsbury. The deal was simple: they’d pay for the unit, I’d drive it around the UK in my own time and if, as a result, they sold some rail seats, I’d get a small commission (which I did for Celtic, but waived for Shrewsbury to help us hit the crowdfunding target sooner).

Since the first roadshow event at Molineux over 7 years ago, I’ve set up and taken down the rig over 100 times. It’s been quite a slog, but ultimately very satisfying to see the message getting through: standing done properly is safe, and standing behind rail seats is safer than standing behind seats with no more than shin-high backs.

With the government review of the all-seater policy now taking place, official guidance on the use of “seats incorporating barriers” now included in the Green Guide and Spurs set to open their new ground with such seating in place, we are clearly getting close to achieving our objective, i.e. that every club should be free to offer fans the choice to sit or stand.

While my work as a campaigning fan will not be finally over until all clubs have that freedom, it is clear that we are now entering a phase where club chairmen, CEOs, stadium managers and architects want not only advice from an ‘educated amateur’, but also authoritative information on how they can use rail seats to enhance spectator safety, what they will cost and how soon they can be installed. In order that I can add that string to my bow, I have therefore made my arrangement with Ferco a more formal one. While still earning my living primarily from my translation work and still spending a good deal of my time in Germany (not least cheering on Union Berlin!), I will now also be formally representing Ferco as and when clubs, architects and stadium developers want to talk about rail seats or other forms of stadium seating.

For fans that means that I’m still banging the drum for rail seats, but can now additionally talk with their club about prices, delivery times and installation without slowing things down by having to act, as previously, just as the middle man. For clubs and architects it likewise means a single point of contact for information, advice and quotations.

We’re not quite at the finishing line yet. But we’re getting close. Hopefully this new arrangement will help me to be of even more assistance to fans and clubs as we enter the home straight.