A Free and Fair Press?

How many times have you read a story in the press about Newcastle United being linked with a top player and then absolutely nothing comes of it? Yeah, me too…..

It seems like nothing can sell newspapers quicker than groundless speculation and transfer gossip. Nothing that is perhaps except tapping into people’s prejudices and cynically exploiting them. The past few weeks have seen a long row between Labour leader Ed Miliband and the Daily Mail. It is interesting that the Daily Mail has described Ralph Miliband, who fought for this country in the Second World War, as somebody who hated Britain, whilst that very same newspaper supported Oswald Mosley’s British Union of Fascists and appeasement with Hitler’s murderous regime. This is also the same Daily Mail which is owned by Lord Rothermere, who like so many other ‘patriots’ in positions of power in this country pays as little tax as he possibly can.

It is perhaps no wonder that figures from across the mainstream political spectrum have condemned the Daily Mail’s seemingly ill-informed vilification of a dead man. Even Tories such as Michael Hesltine and Francis Maude, expressed their disgust at the tenor of the piece from the Daily Mail. I even ended up reprising the cliché from the 2010 election debates, when ‘I agreed with Nick (Clegg)’, when he said “It seems to me that if anyone excels in denigrating and often vilifying a lot about modern Britain, it’s the Daily Mail” Indeed.

We have also seen the return of the Leveson Inquiry into the public eye, with discussions about what kind of regulation the press should have, in wake of the phone-hacking scandal.

The right-wing tabloids have predictably cried out that any greater regulation will see an end to press freedom in this country. Lord Dacre of the Daily Mail has gone as far as saying, “Some have argued that last week’s brouhaha shows the need for statutory press regulation. I would argue the opposite. The febrile heat, hatred, irrationality and prejudice provoked by last week’s row reveals why politicians must not be allowed anywhere near press regulation.”

The right-wing press will no doubt fight any attempts at regulation. It has even been suggested that they will take it through the courts all the way to the European Courts in Strasbourg. I look forward to the Eurosceptic tabloids explaiining to their readers how wonderful the European Union is after all!

But is there real press freedom in Britain today and why are the right-wing pess so against regulation?  It seems to me that, for many of our national newspapers, it is only a free press, if you are rich and powerful and hold certain views.  What the likes of Lord Dacre and his boss Lord Rothermere really want to keep are property rights: the right of their newspapers to twist stories and to twist the political agenda to suit their class – the 1% of wealthiest people in this country, the vast majotity of whom make their money from…..other people’s hard work.

We should indeed have a free press; one which can reflect the views of all sections of society, dealing respectfully with each other. That way we can start to bring about a much-needed democratic renewal of our nation and hopefully usher in an era of fairer goverrnment policies, which can benefit all of our citizens and not just a priveleged ‘elite’.

Nobody in their right mind wants to see the British press become like the old Pravda propaganda machine of the Soviet Union. A genuinely free press could again become a cherished national institution. After all, Pravda in the Soviet Union regularly lied…

But then far too often the freedom of the British press in recent decades has meant nothing more than the freedom to lie, to twist information or at best to present half-truths and myths as the only  side of a story to be reported. Anything has been seen as reasonable, from printing lies and scurrilous gossip to hacking a dead girl’s mobile phone, as long as it helped to sell newspapers and make money for newspaper owners – and keep the views of the vast majority of British people out of the press.

And lie the tabloids certainly have.  To demonstrate this consider two examples, both from The Sun. In 2004, not long after Rebekah Brooks became editor, The Sun had the ‘witty’ headline Swan Bake accompanying a story of asylum seekers killing swans, royal swans no less, and barbecuing them. It was complete nonsense. Somebody had phoned The Sun with the story and the newspaper hadn’t bothered to get even one confirmation to back it up. It fitted their vilification of one of the groups in society they liked to pick on and who of course wouldf be very unlikely to fight back and it could sell them a few extra copies. Confronted with the truth that the story was a fabrication, eventually a tiny apology was printed in The Sun, hidden away inside the newspaper. But by then the damage had been done and an urban myth born…. 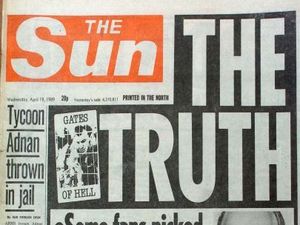 Bui then it isn’t just groups like asylum seekers who have been denigrated by our ‘fair and free press’. Football fans have too. The worst example, again in The Sun, came the week after the Hillsborough Disaster, with the disgraceful headline: ‘Hillsborough: The Truth’. Except of course it was nothing of the sort. Perhaps when football fans today read some of the stories in the press today, stereotyping and denigrating this group or other, they would do well to cast their minds back to the 1980’s when we too were a group despised by the right-wing press.

Let us have no illusions.  What happened that dreadful afternoon in Sheffield could have happened to the supporters of any major club. It could have happened to Newcastle United supporters, if not for the fact that our team in 1989 was nowhere near good enough to get to an F.A. Cup semi-final….indeed on the day of the Hillsborough Disaster, we lost 1-0 away at Arsenal and were relegated a couple of weeks later. However I did myself witness what the South Yorkshire Police were like in the 1980’s, in November 1983 when Newcastle fans came close to being crushed to death on the same Leppings Lane End terraces, whilst the police failed to act in a reasonable manner.

If it had been Newcastle fans involved in the Hillsborough Disaster, then I have no doubt that the same sort of lies would have ended up in The Sun,edited at the time by the now thoroughly discredited Kelvin Mackenzie. Because of course, as we now know, the lies in the newspapers were part of the appalling cover-up about what really happened.

These are just two of the many examples of how the right-wing press have picked on groups in society, who they think are fair game and print whatever they like, no matter how untruthful it might be. And if you have tried to complain about one of these stories you come up against the Press Complaints Commission, run by….the very same newspaer editors. If teachers have to submit to government regulation from Ofsted, why are the newspapers allowed to regulate themseves?

The problem of inaccurate reporting has been exacerbated in recent years as the tabloids have cut jobs, as a result of falls in circulation, due to the development of new media, especially the internet. If you ever watch the excellent film All The President’s Men, starring Robert Redford and Dustin Hoffman and Woodward and Bernstein the two reporters on The Washington Post,  who uncovered the Watergate Scandal, you would be struck by the number of confirmations that editor Ben Bradlee demands before a story would go in the newspaper. With the cuts in staff, it is now more difficult for tabloids in this country to get two or three confirmations for a story. However, that cannot excuse simply printing lies, in the hope they are true, and destroying reputations and lives in the process. .

Journalism has an honourable and vitally important role to play in any nation’s life – too important to be left to the likes of Rupert Murdoch, Rebekah Brooks and Lord Dacre.