Bobby Robson: More Than A Manager

The film, while primarily about football, also revolves around Sir Bobby’s diagnosis of and subsequent battles with cancer, particularly a malignant melanoma, discovered while managing Porto in 1995. Its removal required surgeons to tunnel through the roof of his mouth, removing his teeth in the process, and to fit a partially prosthetic upper jaw. Despite missing the first few months of the 1995-96 season recovering from this major surgery Sir Bobby came back to lead Porto to a second title before moving on to manage Barcelona. His surgeon counselled against taking on too much stress after the operation but admits that he recognised the need it met within him. This is a film about a driven man. Even Gazza calls him ‘a football obsessive’.

The main focus of the film, however, is the football and particularly his period at Barcelona, examining how he revived the team after Johan Cruyff’s regime fell apart. It highlights how he tried to manage the politics at the Nou Camp before being ousted by Club President Josep Lluis Nunez, in favour of Louis Van Gaal in 1997. This despite being voted the UEFA Coach of the Year after winning the Copa del Rey, the Supercopa de Espana and the European Cup Winners’ Cup. Nunez effectively brought forward elections for the presidency by one year to win a further term of office on the back of the wave of Robson’s success. His assistant at the time, one Jose Mourinho, aided by Pep Guardiola provide a ring-side view of how it all panned out. Gardiola adds an interesting postscript by mentioning that he approached Sir Bobby to take him to St James’ near the end of his career but Robson declined the opportunity stating that he had enough midfielders. However, it is Robson’s voice here, as it is throughout the film, which provides the commentary. It is the presence of this voice which gives the film much of its emotional heft. He is contemporaneously describing the events in his career and the fact that ‘Bobby loved a camera’ as the film makers put it, meant that much of what happened to him was recorded.

Using that remarkable Barca season as its fulcrum the film moves backwards and forwards through time, examining his managerial career at Ipswich before taking in his two World Cup campaigns for England in 1986 and 1990. Some excellent contributions here from Gary Lineker and Terry Butcher while Paul Gascoigne brings a lump to throat as he recalls the man who became a father figure and was there for him long after Italia ’90.

The film also includes previously unseen footage of the semi-final against Germany using the cameras set up by FIFA at every one of their tournaments. One camera stays on Robson throughout the game and you can see the impact the game has on him despite his best efforts to present a calm exterior. There’s a lovely moment after England are knocked out after penalties where he puts his arm around the shoulder of a tearful Paul Gascoigne saying “Don’t worry son, you’ve been absolutely magnificent, haven’t you. Don’t worry about it. You’ve got your life ahead of you”. The film then comes up to date with a clearly emotional Gascoigne saying “He made me feel safe”. Something in my eye..

Still going backwards and forwards from Barca, the film looks at his managerial career abroad (still unusual to this day for an English manager) before finally arriving at St James’ Park. As Alan Shearer puts it, ‘He took the club from the bottom of the Premier League to the Champions League’ (film of that great night in Holland) before being dismissed by Freddie Shepherd, an action Lady Elsie Robson, in her first screen interview, describes as ‘brutal’. Shearer is scathing about the behaviour of the younger players at the club at the time while Alex Ferguson adds that he could not believe Robson had been sacked and thought that the club could have used Robson as the means of building ‘an institution’ bringing in someone to learn the ropes under his guidance. Sir John Hall tries to justify the sacking by saying that these decisions have to be made by those in charge. He does not even try, however, to defend the manner of the dismissal.

A look at the roll call of those giving their time to the project is like a football Who’s Who. In addition to those already mentioned there is the original (and still the best) Ronaldo  with some ridiculous footage of him as a 19 year old running riot with Barca. His simple tribute is to say ‘He made me feel calm’ at a time when his world was exploding. He adds that he wishes they could have worked together longer as he still had much to learn from him. Frank Arnesen covers the period at PSV (more league championships) before the film moves to focus on his work in setting up the Sir Bobby Robson Foundation and its groundbreaking research which has saved countless lives. 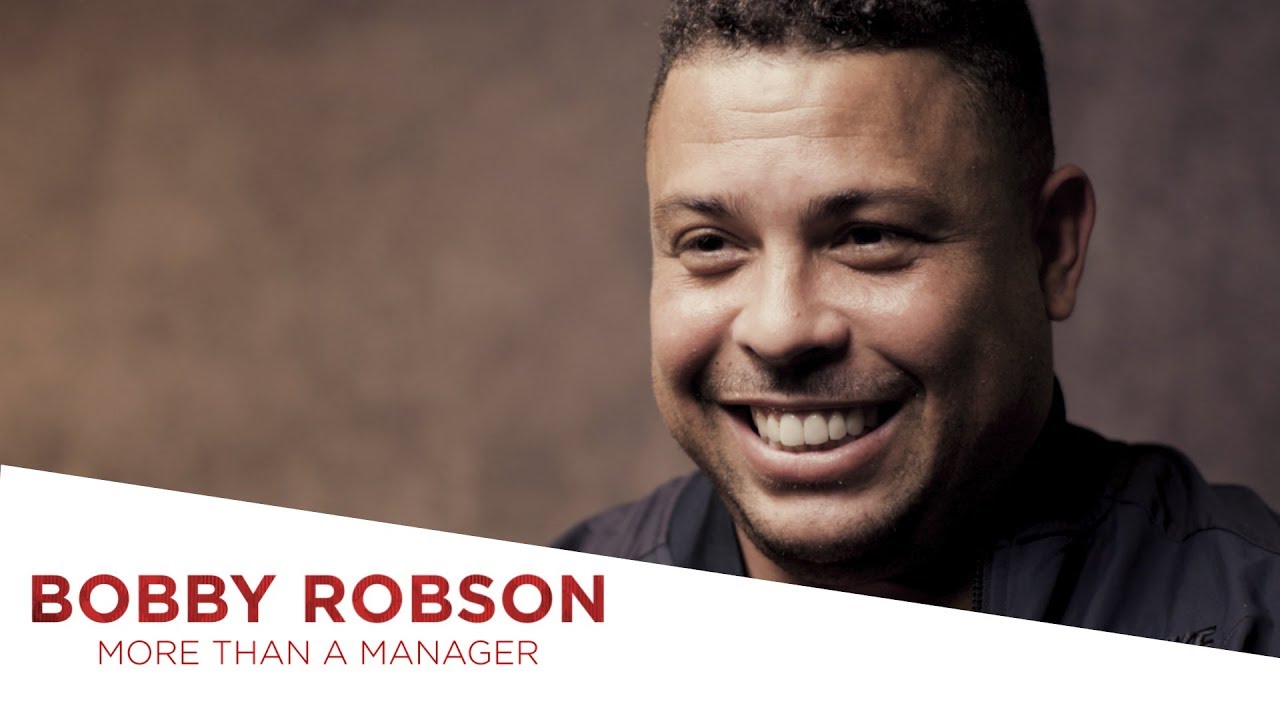 The film is as much about Bobby Robson as a man as a manager. As such it includes an interview with Lady Elsie (the first she has given) which provides some context to the impact his work had on their family life. The film is superbly edited by Steve Williams from hundreds of hours of footage and beautifully paced and shot by directors Gabriel Clarke and Torquil Jones. Speaking to the creators of the film they admitted to being in tears at times during he process of putting the film together. That Sir Bobby had an impact on the lives of those who met him and worked with him can be seen by their eagerness to testify to his many qualities. As Jose Mourinho says at the end “A person does not die until the last person who loves him dies”. This five star film shows Sir Bobby’s legacy lives on.

Available from Amazon on DVD and blu-ray you can alsop download the film digitally here:

Check out the trailer to the film:

Listen to the podcast with Gabriel Clarke co-director and writer: